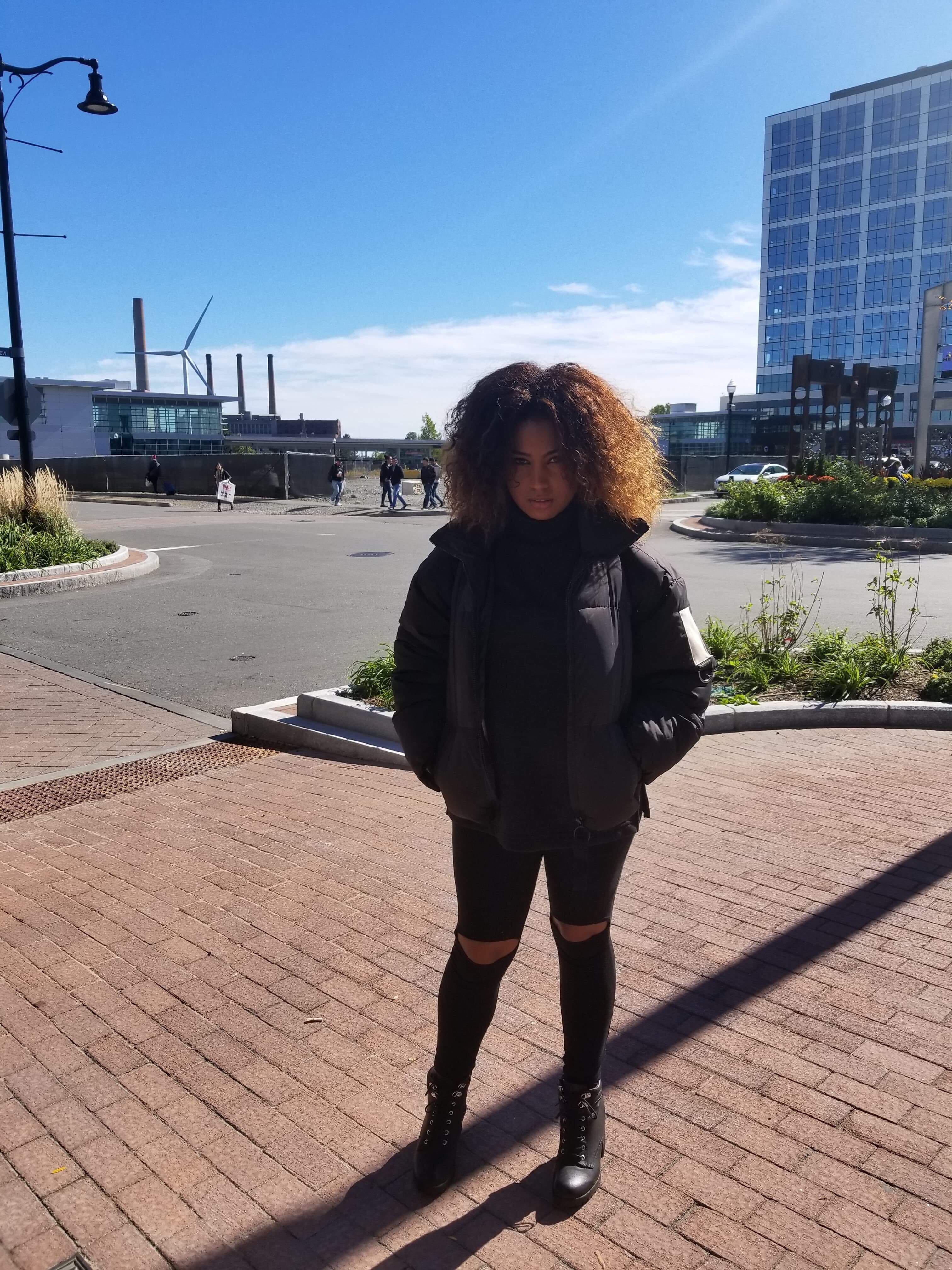 Check out the Podcast below!

I’m a Front-End Developer at a digital agency in Boston, but I had a whole journey before getting here.

I attended Pace University in New York for a year, majoring in film and screen studies. I wanted to be a writer and director for movies. During that year, I found out that I wanted to be an actress so after my year there, I moved to Los Angeles to pursue acting. I learned quickly how difficult it was going to be because literally, everyone wants to be an actor or model or something within that realm. Since it was hardly ever to book an actual role, I’d do background acting on television shows and movies. That’s how I made my money.

Unfortunately, my living situation in LA ended up not working out, so I had to move back home to Boston. I came back and enrolled in a 6-month program to get my license as an aesthetician. The reason why I became an aesthetician was that part of the curriculum is learning makeup artistry. I figured that if I learned to do makeup, I could take those skills and work on sets and avoid straying too far from my passion of being involved with Hollywood. I wanted to go back to LA and pursue my dreams so I looked for loopholes that’d lead me right back there.

Another turn of events turned out that I hated makeup and I didn’t want to be an aesthetician. Although, I did enjoy waxing and I was also really good at it, so I became a wax specialist. I worked at a popular waxing company and built up a golden clientele for about three years. At the same time, I was also in school getting my associate’s degree for Communications through Duet’s online program.

What drew you to Resilient Coders?

Towards the end of my associate’s degree, I learned about Resilient Coders through my school. My counselor gave me a heads up that they had a hackathon that weekend, which is when they choose who gets to participate in the program. I was interested in the event, so I decided to attend and see what it was about. To my surprise, I got in! My life transitioned quickly after getting the news. I quit my job, warned family and friends that I wouldn’t be around as much for a few months, and dedicated all of my time and effort to the program and learning to code. I learned HTML, CSS, and JavaScript. Within eight weeks, I had built around 15 responsive and functional websites. Another fun part of the program was how many tech events and meetups we went to weekly. I experienced attending some cool, visually amazing events with mind-blowing technologies. My bootcamp and apprenticeship with Resilient Coders were from January to May of 2017, but I still revolve myself around them and the bootcampers. They will always have my full support!

Did you see yourself going into that front-end route or becoming more full-stack?

Since I was new to coding, I didn’t understand the differences or skill sets of doing front-end, back-end, or full-stack. My cohort for the boot camp only learned front-end, whereas now, Resilient Coders teaches full-stack. I had no choice but to learn front end development, but I’m happy I did because I’m a very visual person. I like bringing a design for an interface to life. I don’t know if I ever want to be full-stack, it’s not a goal of mine. What I’d love to learn and have started looking into resources, is UX design. I’ve even written a blog on Medium listing tons of resources for those also looking to learn.

How did you start #BlackTechTwitter? I see it becoming massive in the next few months.

I had joined Twitter at the end of August 2018. I got active on Twitter near the end of September. I went on Twitter because I had lost my first developer job. I was job searching, studying and practicing for interviews. I felt like going on Twitter and giving an update about my successes and failures would be insightful. When I started doing that, I noticed that the tech community on Twitter was immense! Not only that but there were so many black developers and black people in tech that I never really saw anywhere except online. It was eye-opening and made me think, “Wow, what pipeline problem?”

That’s when I put out a tweet saying “What does Black Twitter in Tech look like?”. I only did it because I wanted to see and be aware of the different roles black people had in tech. I told everyone to add a picture because again, I’m visual. It’s nice to read tweets from black people who talk techy, but I want to actually see you. I want to see people who look like me since I don’t get to see it at work. The response was immediate and crazy, as you can see in the numbers. This was global- people from all over the US, Africa, London, South America, Asia, everywhere! Not only were black people in tech from all over the world responding but so weren’t big established names in tech, in politics, Hollywood, all different industries. The fact that it was shocking made me a little sad. Why didn’t I know that my people were a huge part of this industry?

People of color always hear that there’s this “pipeline” problem. Employers claim that they can’t find people of color to fill their roles, but I look at that as an excuse. It doesn’t add up, especially now with the number of responses that the #BlackTechTwitter thread has and continues to receive. These are black people in tech ranging from junior developers to CEO’s of tech companies, conference founders and investors. These are highly skilled and talented black people in tech looking to contribute and thrive in this industry.

While the thread was circulating, I built a Discord server called Hire Black Tech which now has 1,200 members from Black Tech Twitter globally. The discord is organized by location, tech stack, interests, conference, personal achievement channels and more. We even have an ‘off-my-chest’ channel which is a safe space for members to discuss hardships they’re dealing with. The overall purpose of the discord is to have a space to communicate with people who look like you, in your field since it’s something we don’t get to experience in reality. It’s a community and safe space where members can continue learning, networking and receiving support from others who understand your struggles and desires.

Where do you envision seeing this head in a few months or the next 1-2 years?

It’s hard to say. I’ve had a lot of people wanting a lot of things from #BlackTechTwitter. They want conferences and meet-ups. They want a website and database where employers can reach out to the #BlackTechTwitter community with job and internship opportunities. I want it too, but it just takes time. We’re still gathering the community and a lot of us are working and dedicating time to personal projects we’ve been working on. As of now, we have a live stream every Sunday. Someone from the Hire Black Tech Discord will speak on a topic they have interest or experience in, and viewers in the chat will ask questions and participate. It’s a cool dynamic and super educational.

Overall, #BlackTechTwitter is a movement, and its purpose is to bring awareness to issues revolving around hiring black and brown people in tech. Now, when I hear that companies are having a hard time finding POC to fill their roles, I can point them to #BlackTechTwitter and so can’t everyone else involved in and supportive of the movement. We don’t want any more excuses. We debunk the excuse of why yet another role had to be filled by another white person in a company full of white people.

What are you passionate about? Where do you see yourself heading in 1-2 years regarding your career path?

My passion is always going to be writing, acting, filming, and editing. In a few years, I’d also like to learn about real estate and business. Real estate is very important to me. The purpose of purchasing land and property would be so that I can give it back to the people being pushed out. I can build beautiful and safe communities for people being forced to live because of gentrification. I also want passive income so I can spend more time on my hobbies and helping others, rather than worrying about a 9-5 working under someone else. The network I’ve built from #BlackTechTwitter will make these goals of mine easier to reach because so many people in this community have the knowledge, experience, and connections to help others striving for success for themselves and their communities.

Do you have any words of wisdom that you would like to give out to the careerbyte community?

If you have any questions, reach out Pariss on Twitter.

Learn more about Resilient Coders below:

The form you have selected does not exist.

My Passion in Music to Becoming a Resilient Coder – Derek Scarlett