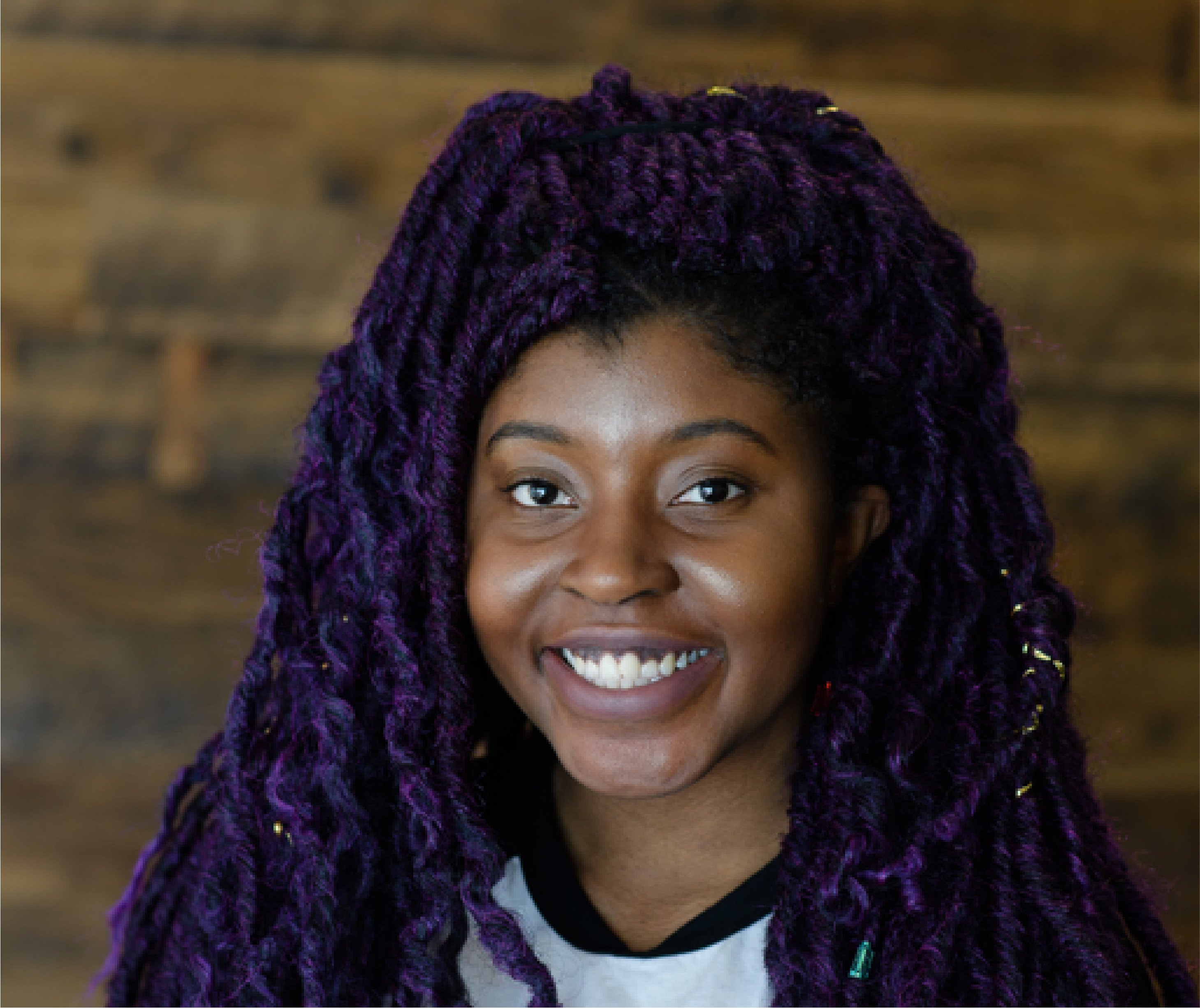 Hey, my name is Rizel Bobb-Semple. I’m a loud introvert. I like to mostly keep to myself and I’m actually very shy, but generally, when I talk, it’s at the top of my lungs. I can be very bossy, and I’m ambitious—I know what I want and people saying no usually doesn’t stop me. I’m also really curious. I get bored when I’m not learning.

I was born in a Caribbean Island called Antigua to parents who were born in Guyana, South America, but I’ve lived in the USA most of my life. Because I’m a DACA student, I got a lot of pushback about attending college. Some people even told me I probably can’t. However, I’m proud to say that today I’m a new Software Developer at Veson Nautical, a maritime software company. I’m also a bootcamp graduate and a Computer Science student at Boston University. As I said, people saying no usually doesn’t stop me.

Did you ever have to overcome a setback or fail at something?

Yes, so many times. I’ve never been naturally good at anything. I don’t even know which failure to pick as an example because failure happens for me so often. I’ll be real. Sometimes failure can feel crippling, but I’ve noticed that I’ve never experienced success without failure. They go hand in hand. When I fail things, I end up redoing the task, and I redo it in a smarter, more efficient way. Failure makes me an expert.

What are you passionate about?

I’m passionate about increasing diversity in technology. Diversity for me includes ability, gender, race, and age. Having a diverse team means your company will have diverse perspectives, which means your product will be more successful because it can reach a wider audience. Also, it wasn’t until I was 18 or 19 that I met a woman of color who was a Software Developer. Before that, becoming a Software Developer didn’t seem like an option for me. So part of increasing diversity in technology is representation. It’s important that we inspire other young minorities to study and work in STEAM. Minorities shouldn’t have to figure out that they belong in tech when they’re 19 or older.

How did you get into programming?

I got into programming when I took a SQL course at community college. SQL is a declarative language, so it was a good introduction to programming for me. I recognized how powerful SQL is. It was kind of cool because I never thought of myself as a logical thinker. I got to exercise a muscle that I never used before. I became curious about all the other languages that existed, so I sought out ways to learn more languages.

What was your journey like getting to where you are today?

My journey has not been traditional at all, and I credit where I am today to all the mentors I’ve ever had, all my past and current managers, and programs like Resilient Coders and Hack Diversity. All those people have recognized my skills and publicly encourage me. Their encouragement gives me confidence in myself and my abilities.

My journey in short: I started off as a Psychology major, switched to Computer Information Systems, completed a couple IT internships, attended Resilient Coders, and now I’m a Software Developer.

What drew you to Resilient Coders?

When I was interning at HubSpot, I was surrounded by so many engineers and there was such a great emphasis on improving the user experience. I didn’t feel confident enough in my programming abilities to pursue a position in software development, so one day I Google searched “learn to code for free”, and Resilient Coders popped up. I attended a Hackathon and talked with the founder, David Delmar. I loved that the program was geared toward people of color who were interested in technology. I don’t regret my decision to attend at all. The leaders of the Resilient Coders organization are so intentional and caring. Resilient Coders greatly improved my life.

What was your favorite project to work on?

My favorite project was not technical. While interning at the Help Desk for HubSpot, my coworkers and I started a project where we would donate laptops to local charities. Giving people in the community access to technology is so fulfilling and I hope it improved someone’s life in some way.

What advice would you give to students in the STEAM field that want to program but might feel too scared to start?

I used to think it was scary too. I only had depictions of programming for television characters, like Wade from Kim Possible. Programmers seemed like geniuses who were effortlessly typing crazy, complicated algorithms in command prompt.

I would tell people don’t be scared. It’s just like learning another language. It’s easy to start learning online for free. You can start with FreeCodeCamp, they have a great curriculum and a great community. Coding is hard sometimes, but I haven’t met an engineer who never everything. If you love to continuously learn, programming is for you. Also, always ask for help.

In fact, if you’re in the Boston area, visit Resilient Coders on Tuesday and Thursdays after 3:00 pm, there are real engineers there who are willing to help you learn.

Any final words of wisdom you would like to give to the community?

To employers, value candidates of all backgrounds and levels. It’s so discouraging to see employers not willing to invest in a more junior developer or anyone who is not similar to the team, but then claim that they’re dedicated to diversity and inclusion. That’s so contradictory.

And to people interested in joining the field of technology, just go for it. Keep learning, join communities that will help you succeed, attend meetups, and apply for jobs even if it says you’re not “qualified”.

What is your favorite spot in Boston?

My favorite spot is Ali’s Roti. Roti is a Caribbean dish, and I’d describe it as a curry burrito for people who never ate roti. Trinidadians and Guyanese make the best Roti (people debate this, but this is facts). I like eating there because I love to celebrate my culture.

Connect with Rizel Bobb-Semple on Linkedin!

If you have any questions feel free to reach out Rizel on Twitter.

You can also find Rizel’s work on GitHub!

If you are a student or professional in the “Science, Technology, Engineering, Arts, and Mathematics” field and you want to tell us your story email [email protected] or tweet @steamboston and let’s talk.

We help students and professionals in the Greater Boston area with career exploration and career advice, check us out at steamboston.com

How to Deal with Job Search Rejection