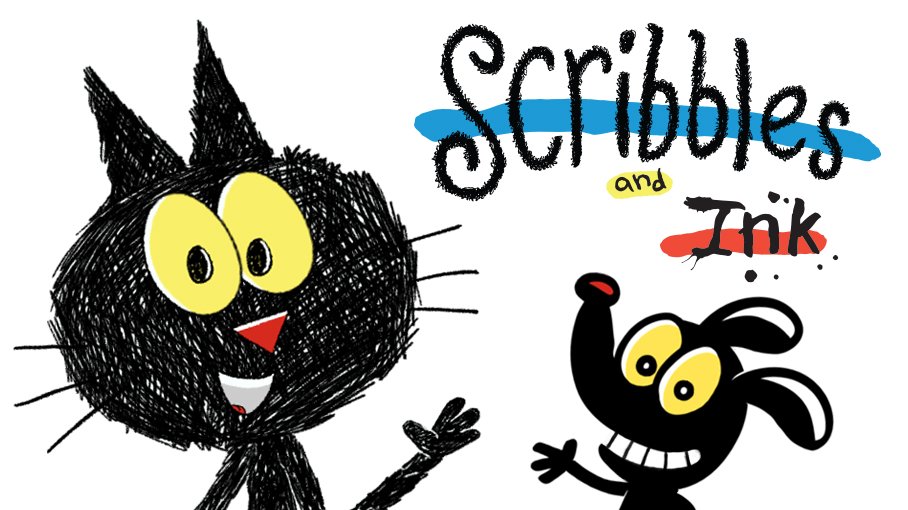 For Episode 9 of the STEAM Boston Podcast, we’re featuring WGBH’s Marisa Wolsky. We’re going to be talking about Scribbles and Ink. Based on the popular books and characters by author/illustrator, Ethan Long, Scribble’s and Ink is a character-driven, original digital interactive series that allows kids to discover the utter joy of using paint, brush, crayon, and pencil to propel their way through an adventure.

Produced by WGBH Kids for PBS KIDS, the Scribbles and Ink experience begins in the Scribbles & Ink studio, where animations of lead characters, Scribbles, and Ink, prompt kids to a free drawing experience. When kids are ready for an adventure, they can go to a story room and click on a photographic object – an umbrella, balloon, planet, or box – for the integrated game and video experience that follows.

You’ve worked at WGBH for about 30 years, tell us about your impressive experience.

While I worked at WGBH, I mostly worked in children’s media and I also worked on NOVA for a couple of years. I mostly worked on STEM projects because we get a lot of our funding from the National Science Foundation.

Shows like ZOOM were multidisciplinary, but it did have segments that were devoted to science. Peep was one of the first animated shows. It created a curriculum for preschoolers that was developmentally appropriate. It focused on learning science by having hands-on experiences. I also worked on game shows like “Where in the World is Carmen Sandiego?”. I created the Peabody and Emmy award-winning show “Design Squad,” which was a reality competition show to get upper elementary school students like tweens interested in engineering. “Design Squad” is also a website. I also worked on digital projects like “Plum Landing” which was focused on environmental science.

The newest project I’m working on is called “Scribbles & Ink.” “Scribbles & Ink” is a game WGBH produced for PBS KIDS. It’s an app and a website. The challenge was to integrate video watching and games all in one app. The game really propels kids’ drawings on an adventure.

The game incorporates many elements from Science, Technology, Engineering, Arts, and Mathematics. What was one of the most challenging parts of building the game?

One of the creative challenges was figuring out how to make the experience replayable so that the interactions that we put in the game make it so that kids want to keep drawing again and again. We wanted to make sure that the interactions were interesting. We did a lot of sessions in schools where we showed kids different versions of the game. Some just on paper and then others very rudimentary prototypes.

It was replayability that was our big nut to crack and we sort of got an understanding that looping made an experience that was open-ended. We try not to be too specific when asking them to draw. When things are more general, their imaginations can really come into play.

The second challenge we experienced was more technical. It was how to get broadcast quality animation into a game for the kind of money that we had with our budget. We did that by programming the animation using Cocos, which is a coding platform. We used that rather than using a typical animation package like Harmony.

Did you have any roadblocks when you were creating features in the game?

I would say we didn’t have any roadblocks, but it was definitely something we always considered, to make sure the game was accessible to both the younger and the older end of our audience. There’s a big age gap between a four and an eight-year-old. Since we’re on PBS, we put material on the website for kids that don’t have tablets. And by the way, the app is free which is great for any kids that want it.

We launched in December and the game is doing extremely well. PBS has a big and young audience, so we’ve succeeded in it being able to target the younger and older end of the audience.

In the storyline, the first one was going on a rocket ship, what was the process behind creating a story that was captivating for the four to eight age group?

For the first four stories that are in the game, we focused on things that were more domestic in nature – making costumes out of boxes or throwing a party, which are very relatable to the kids. We’re actually in production for a second season, which is really exciting. In the second season, we’re going to have Scribbles and Ink go off to more fanciful lands. The other thing we developed were the interactions, especially with the different art tools. We wanted to make sure they felt like real art tools, for instance in the sound that they make and their transparency. We also wanted to ensure that the interactions we programed would allow for a lot of open creativity.

What metrics do you check to know that the game is overall a success?

Since it has launched, Scribbles and Ink has done really well. Kids actually spent twice as long on the game as the average time spent on other games in the PBS KIDS Games app. We coded the Google Analytics so that we have an understanding of how much kids looped.

Are you going to implement subjects of STEAM into the Scribbles and Ink storyline?

Our next step is to expand the world beyond drawing. Think about different media that artists use. We hope for a big future with these characters. You can imagine them being inventors, using a lot of skills in STEM in order to create.

What is something about making the game that the audiences would not think about?

One unique thing about the game is that people most often think about interactive stories, they follow the format of watch, stop, do, watch, stop, and do. It prevents kids from feeling like they’re playing alongside the characters or they follow a choose your own adventure format, which is constraining because you need to know the outcomes ahead of time. Therefore, the story plays out in limited way.

PBS KIDS, the number one educational media brand for kids, offers children ages 2-8 the opportunity to explore new ideas and new worlds through television, digital media and community-based programs. PBS KIDS and local stations across the country support the entire ecosystem in which children learn, including their teachers, parents and community. Provided by stations, the free PBS KIDS 24/7 channel and live stream is available to more than 95% of U.S. TV households. Kidscreen- and Webby Award-winning pbskids.org provides engaging interactive content, including digital games and streaming video. For more information on PBS KIDS content and initiatives supporting school readiness and more, visit pbs.org/pressroom.

WGBH is America’s preeminent public broadcaster and the largest producer of PBS content for TV, the web and mobile, and a major supplier of programming for public radio nationwide, on air and online. WGBH’s television channels include WGBH 2, WGBX 44, WGBY 57 and the digital channels WORLD and Create. WGBH also is a major source of digital content and programs for public radio through PRI/PRX and a leader in educational multimedia with PBS LearningMedia, providing the nation’s educators with free, curriculum based digital content. Find more information at wgbh.org.

Scribbles & Ink was created with funding from the Corporation for Public Broadcasting and PBS KIDS.

5 Organizations that Support People of Color in Tech (Greater Boston)